The year 1921 was special in the US monetary program because it saw the creation of the Morgan silver dollar and the Peace Silver Dollar.

In this article, we will talk about the 1921 silver dollars, its values, and the grades available.

The emergence of two different silver dollars in 1921 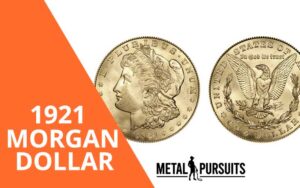 During this period, it was strange to find minting facilities producing two different kinds of designs of the same currency in a year.

For most of the year, the mint facilities made the Morgan Silver Dollar while the Peace Silver Dollar designs were formalized. Finally, after much deliberations, Anthony De Francisci’s design was accepted for the Peace Dollar.

The production of the Peace Silver Dollar continued to 1928 before it was officially discontinued due to materials. However, in 1934, production restarted before finally stopping in the latter months of 1935. 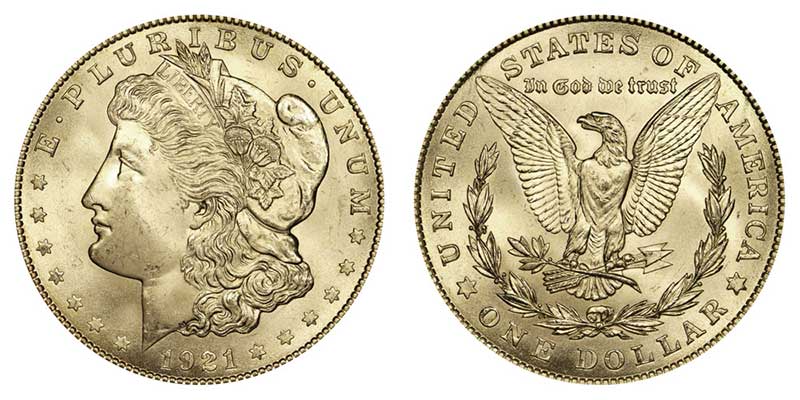 After being discontinued for more than 15 years, the George Morgan silver dollar production started in the earlier months of 1921. It was on hiatus because of the unavailability of silver blanks which caused production issues.

The minting of these coins didn’t last long though because around August-September, production was halted permanently. However, during the short time it was minted, about 45,172,000 were produced which makes it one of the highest silver coins in circulation.

An Overview of the 1921 Peace Silver Dollar

The death of the Morgan Silver Dollar was the birth of the Peace Dollar. Despite its seeming long production duration, about 1,113,000 were minted and given to the citizens. The low production of this silver dollar makes it scarce than the 1921 Morgan Dollar.

Furthermore, it was a coin that was widely accepted by the citizens who gave it positive feedback. It has a similar composition with the Morgan Dollar (89% silver and 11% copper). The only difference is the missing denticles which are found in the Morgan Dollar.

Value of the 1921 Silver Dollars

An average Morgan dollar goes for about $24, which could increase to around $ 37. Moreover, graded coins like the MS-64 are worth about $56. For the 1921 Peace Silver Dollar, it is worth higher because it’s rarer than the Morgan series.

How to know the worth of the 1921 silver dollars?

Many people don’t know how to get an estimate of the coins because prices and value differ. Knowing the exact worth of these values will help you during the sale. Here are some tips to help you:

This is an important tip many collectors use in ranking series of Silver dollars because it helps them know it’s worth. You can check the dates on the obverse side of the coin. The older the coins, the more valuable they are in the market.

Once the date the coin is produced is ascertained, you will need to know the mint that marked the coin. During the production of these coins, they were usually strikers with a unique mintmark for design.

Another factor that affects the value of the 1921 Silver Dollar is the surface condition. Many collectors love Silver dollars with an appealing and attractive surface design. However, be wary of weird drawings which might mean nothing to collectors.

General condition of the Coin

Ensure that the overall state of the silver coins is in optimal condition because it affects the value. Clean the coin with professional services to get better value for your coin.

The 1921 Silver Dollar remains a top coin highly sought-after by collectors. The coins are two: Morgan silver dollar and the Peace Silver Dollar.

They have similar features, weight, and composition, but they differ in the presence of denticles. The value of these coins differs, however, some factors can help you determine the 1921 Silver dollars value.