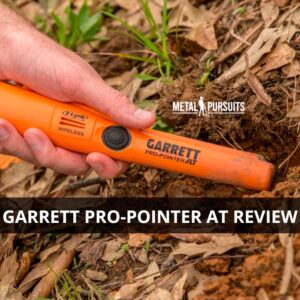 Have you ever gone on a treasure hunt before? Or did you only follow someone and watched the practice?

Treasure hunting comes with digging – to make certain what the detector is alarming for.

Still, while the recent detectors on the market space have been improved on this wise with Digital Target ID, there’s yet a lingering challenge.

Users still have to dig around the area where their detectors have alarmed the presence of a treasure.

No matter the fun and thrill that accompany it at the beginning, this particular activity eventually becomes exhausting and will have your hunt dawdled.

Now, this time wasting of digging to unveil your find is what the Garrett Pro-Pointer AT seems to address effectively.

Among other amazing features that the device possesses (as we will discuss later in this review) is a unique feature upon which its brag in the market is based on – pinpointing technology (in all-terrain, a vital component I must add).

As you read on, you will find information that will acquaint you with this piece of art of metal detecting. I will discuss its entire specification, the features and benefits that are vital for your acquaintance of the device, and of course, I will not leave out its pros and cons, lest I become a liar shall I claim the metal detector is entirely perfect.

The pinpointing feature (in all terrains) that qualifies the Garrett Pro-Pointer AT as the most advanced of the Pro-Pointer series will also be explained during this review.

The feature that puts this device way ahead of its competitors is its submersible feature that is up to 20 feet. Quite incredible, if you ask me!

Garrett is not a novice in the business of metal detecting. With some of the popularly excellent detectors on the market, such as Garrett AT PRO and AT Gold, this manufacturer can be said to know his onions. Check our list of top 5 Garret metal detectors.

In recent times, the industry took the art of metal detecting to a higher level with its Garrett Pro-Pointer. Such a beauty!

Like I earlier stated, the incredibly unique feature is its pinpointing technology with which you can exactly tell the location of your find while on a hunt.

The Garrett Pro-Pointer AT model goes a notch further by including the All-Terrain (which is what AT stands for) feature with which you can pin-pointedly hunt confidently in all terrains. 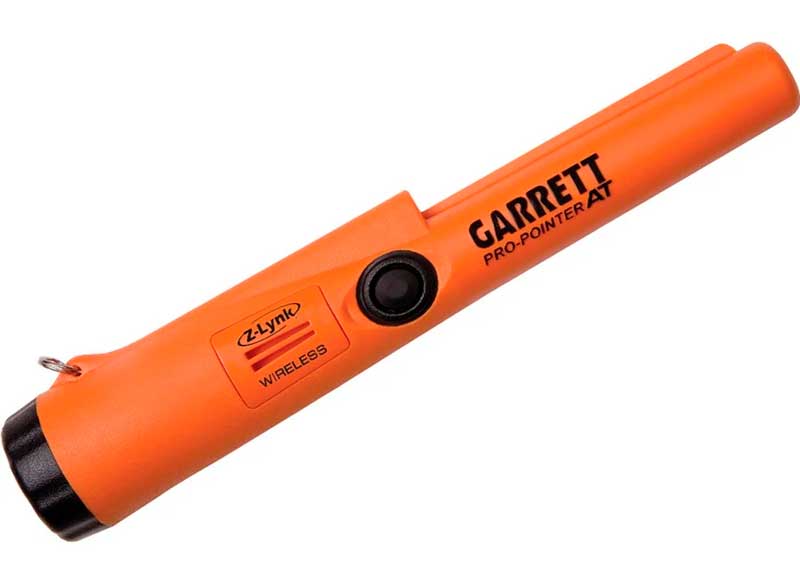 Shall we also consider its unique underwater functionality design? One may wonder what the uniqueness is in this case, as many other pinpointers can function underwater.

The uniqueness here is that simple orange color that coats the Garrett Pro-Pointer AT. It implies that the lack of blend between the detector and the water when submerged improves the visibility of the user during hunting, even in the murkiest water.

An essential feature of the Garrett Pro-Pointer AT, one that cannot be overlooked, is the in-built Z-Lynk Wireless Technology, which transmits a target signal to your headphones.

The Garrett Pro-Pointer AT is a lightweight battery-powered metal detector with an average length long enough for comfortable use. The battery has a long lifespan, lasting up to 30 hours.

The device features three sensitivity levels, which are adjustable due to differing locations. More so, it has a single button for different operations, including sensitivity adjustment, power, stealth mode, and retune; thereby, avoiding the con of a high learning curve to use the detector.

For our energy-saving friends, the metal detector features an automatic power-off to save batteries after five minutes of warning sounds. The casing is strong and rugged and has a patented scraping blade with which you can scrape your terrain in the bid to locate your target.

The product specifications of this metal detector are thus highlighted:

The Garrett Pro-Pointer AT comes with a kit that contains the following:

Garrett Pro-Pointer AT Features and Benefits

What’s the fuss about Garrett Pro-Pointer AT? What makes it a metal detector worth the purchase? Let’s find out:

How does a metal detector work? In simple words, a target signal, either by sound or vibration, is transmitted to your headphones (which may be wired or wireless) when the detector’s search coil is over a target.

Why should there be any issue with that?

Oftentimes, the challenge is the time it takes for the signal to travel from the detector’s search coil to your headphones. In other words, before you hear the target signal, you might have moved your detector past the point where your target lay.

What has Z-Lynk wireless technology got to do with this?

I believe the answer is obvious at this point, no? It reduces the lag of signal transmission to almost zero. That way, you can hear your target signal while the detector’s search coil is directly over the item. The transmission from the detector’s search coil to the headphone using this technology is six times faster than the speed of Bluetooth and four times faster than every other wireless headphone.

A single press of a button on the device automatically fine-tunes the metal detector to narrow the detection field so that larger targets can be precisely pinpointed.

This feature is profitable to the user in that he/she is able to gauge target size and distance and shrink the detection field for a precise pinpointing of large targets.

The retuning feature also helps the user identify edges of large targets and tune out terrains, such as wet beach sand, mineralized ground, and the likes. The user is also able to pinpoint multiple targets against one large target signal. 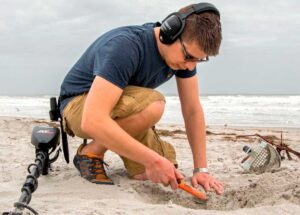 You have read the word pinpointer a couple of times in this review, and you’re probably wondering what it means, or you have even heard it before, but you don’t have a clue on how it works.

Here is what it is:

When you detect a target with your regular metal detector, you can take out your pinpointer to zero-in the target’s exact location. Hence, a pinpointer is a handheld metal detector that treasure hunters use to pinpoint (as the name suggests) their targets. With a pinpointer in hand, securing your target from the dirt where it is buried becomes easier and faster.

Do you really need a pinpointer?

You can definitely do without a pinpointer but ignoring this crucial technology is like walking miles to talk to a friend because you don’t need a phone to communicate.

In many ways, this device is one of those things you can’t tell what you’re missing out on until you give it a shot. I mean, the part where you tend to reduce the stress and ache that comes with bending and squatting while digging in response to a target signal is worth every praise we can shower on this device.

This in-built blade cuts through the soil for a speedy recovery of targets.

The industry has also included a feature of patented proportional audio/vibration for receiving target signal transmission.

Treasures differ in size, and larger targets are easier to detect than smaller ones. Hence, the three levels of sensitivity of the Garrett Pro-Pointer AT with which you can detect targets of varying small sizes is a huge advantage. It improves the detection of nuggets. 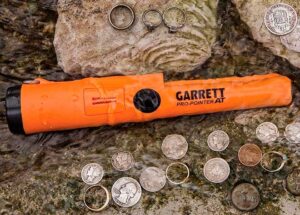 Treasures can be found anywhere. So, why should anyone restrict themselves to land when they can as well take advantage of water? One may even argue that a pinpointer such as the Garrett Pro-Pointer AT is more profitable for water terrain.

The device is submersible up to 20 feet and can be used effectively in both fresh and saltwater, although you may need to tune its sensitivity when being used in saltwater.

Besides this fact, when underwater, visibility reduces, especially in murky waters. Seeing what you’re searching for becomes more challenging. The Garrett manufacturer has been wise to coat the Pro-Pointer AT in orange color to improve visibility in such terrains.

If the device has not been used for a while on the hunt, the battery-saving feature kicks in, and it powers off automatically. The device is able to notice that you have not pressed a button on it for a while; it then gives off a five-minute warning chirp before it powers off by itself to save your battery life.

Devices with lots of buttons are known to have a high learning curve to master their use supposedly.

The user must have had to sit and memorize each of the buttons’ usage if he/she would enjoy effective hunting.

The Garrett Pro-Pointer AT, on the other hand, features one-button with multi-functionality. The button can be operated for power, sensitivity adjustment, retune, and stealth mode.

More so, the button is large enough such that you can use it conveniently, even with gloves.

However, a single-button operation also comes with its perks, such as difficulty to learn and use should there be too many functions for a single button.

Garrett Pro-Pointer AT Pros and Cons

1. Is the Garrett Pro-Pointer AT waterproof?

If I may, this question is equivalent to asking if the Pope is catholic. The degree to which you can enjoy the waterproof (up to 20 feet) feature of the Garrett Pro-Pointer AT is the added feature of its orange color to improve visibility underwater.

2. Is the Garrett Pro-Pointer AT good for saltwater?

Yes, it is, and any kind of water for that matter. You only need to retune the device for effective detection in saltwater.

3. Can the Garrett Pro-Pointer AT detect gold?

4. How deep can the Garrett Pro-Pointer AT detect?

The Garrett Pro-Pointer AT, which boasts of an increased sensitivity compared to other metal detectors on the market, can detect items when fully submerged as deep as 20 feet.

Note that you will find somewhat credible information on the net that claims the Garrett Pro-Pointer AT is a submersible 10 feet detector, but I can attest to the former claim based on the manufacturer’s description.

The game of treasure hunting has been revolutionized with the variety of metal detecting products proving themselves as a force to be reckoned with, and the Garrett Pro-Pointer AT is not an exception.

Are you in search of an excellent pinpointer, which is affordable and would serve your needs accurately without functionality issues?

The Garrett Pro-Pointer AT is an excellent choice.

While it may not be the cheapest metal detector (but relatively priced) in the market, saving up to purchase this device will be money well spent. Besides, should you encounter a functionality problem, you have a two-year warranty that can cover up for it.

The Garrett Pro-Pointer AT is a metal detecting accessory that will work perfectly alongside any metal detector. Seeing that you can use it in spite of the terrain – from land to sea; in fresh or saltwater – it is time to purchase this device and get dirty and wet.

Nevertheless, ensure to carefully peruse the information that would acquaint you enough to decide on a device that is specific to your needs.

You can check the price and verified customer reviews of the Garrett Pro-Pointer AT by clicking the links below.