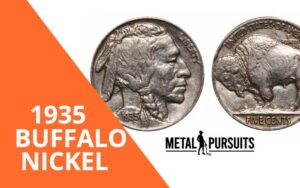 James Earl Fraser was behind the creation of this coin and it was made in 1913, while production continued till 1939. The US government aimed to honor Native Americans and Bison, which were a major history of the Wild West. Luckily, in 1935, buffalo nickel production increased to 81,657,000 pieces, and the idea was to design a coin everyone cherished.

This product reduces the value of the 1935 asides from the die reverse variants, whose cost remains significant.

Let’s take a look at the 1935 Buffalo nickel, its variants, use, and other values of the coin.

About the 1935 Buffalo Nickel Collection

The dates, 1934 and 1935, are historic because the buffalo mint came into circulation. About 58,366,000 of the total numbers of 1935 Nickels were produced without showing a mint sign. This coin can be purchased in great condition for just $2 and $3. However, some specimens in mint condition should cost around $50. This coin is a good mint state and can be worth more than $270. A  word can be seen inscribed on this coin in the Latin letter ‘e Pluribus Unum. 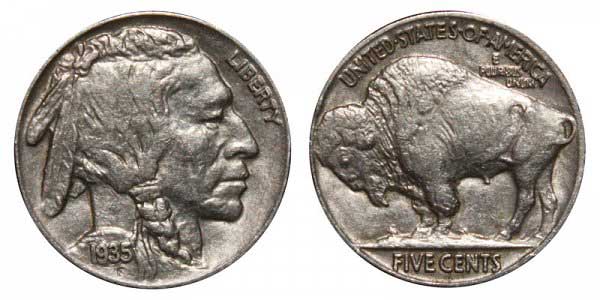 It is believed that only 2% of all saved obverse 1935 buffalo nickels are in excellent grades with comprehensive details. Furthermore, a coin in the MS 65 condition should be worth an amount above $100, while an MS 67 grade sale is around $900 – $1000.

While production of the buffalo nickel coin started in 1935, the Philadelphia mint started much later. Here are some 1935 buffalo nickel variants you should know if you are interested in a detailed analysis.

These 1935 D buffalo nickels are examples of top coins that have about 14,078,000 manufactured yearly in Denver. The average price of this coin starts from $4 to $93 depending on the condition it is found. To distinguish this nickel, you will find a D number buffalo nickel value on the reverse of the buffalo hoof, especially on the 5 cent denomination.

San Francisco only produced about 18,272,000 of this coin in 1935, which makes the mintage one of the lowest this year. These days, a piece of this grade should cost only $1, but you should budget about $80 for the MS 63 specimen. This rare specimen was minted in San Francisco and you will find the S mark on the side of the 5 cent currency.

This 1935 buffalo nickel with a doubled die reverse is a unique coin type in its series. These coin types are produced when the master hub was doubled in the designed part and doubled on the leading die.

You will find the double reverse in the five cents where it is inscribed in the diameter. This is common with error coins, where anything doubled is considered rare and it could cost money. Just a few 1935 DDR Buffalo coins can be found. The price for this coin specimen should be worth around $42 to $15,600 and could rise to about $18,500 for good condition coins.

Just like other variants, this item has a price that has been stable over the years due to some factors. Because it doesn’t have precious metals, it doesn’t react much to gold and silver price fluctuations.

But coin experts believe that these prices will remain stable or pricey because of the issues with collectors. Be careful though about counterfeits. The reason is that rare coins like the buffalo nickel are susceptible to fake duplicates.

Grades of the 1935 Buffalo Nickel Coin

Buffalo coins are popular and are heavily sorted after by collectors because of their high value. The buffalo nickel value of the coins is based on a composition like hair details, ledge, mintmark, date, mint errors, and signs. Here are some of the varieties of this coin:

This nickel grade is a premium grade and closely minted coin. Since such a piece is rare, it’s difficult to know if it has been damaged, worn, or scratched. This coin can be identified with a unique luster that appeals to most collectors. The rarity of this piece makes inspection a must.

This is an example of a  grade that has a limited duration in circulation and looks pristine. But when you look at this coin closely you will notice some shiny scratches, designs, and stains on the copper surface. Also, there are some visible inscriptions on the native American images.

This buffalo nickel grade has spent some time in circulation, so you should be able to identify the difference in this coin. A visible sign can be found near the bust of the Indian cheekbone, bison head, and liberty buffalo legs. You will also see some fine details which are missing from the animals’ hoofs, Indian heads, and some damage data on the surfaces.

This is the worst buffalo coin grade for any collector because it has a problem with doubling circulation. This coin has a smooth surface and is flattened so the inscription can be easily identified. This coin can be found around $10-$21.

The 1935 Buffalo nickel set is an affordable coin that most coin collectors seek. However, for most admirers, it is difficult to find high-grade specimens. The prices of these coins differ based on their condition and errors. Though it’s easy to find coins minted in 1935, it’s a challenge to find a high-graded piece.