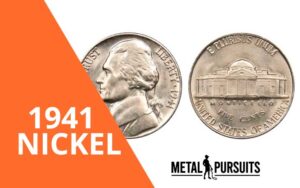 However, the ones produced in the year 1941 have a lot of sentimental value and this value in price is between 5 cents and 200 dollars for the average kind.

You should even know that some have sold for as high as approximately $11,000.

So what makes the 1941 Nickel so special and valued?

The Secret of the 1941 Jefferson Nickel’s Sentimental Value

Frankly speaking, the 1941 Jefferson’s Nickel is not structurally or functionally better than the earlier and later 5 cent currencies before it. However, the extra sentimental value stems from the fact that it was the last coin in a long while that used Nickel as part of its physical composition.

No less than 25% Nickel and more copper were used in making this coin. However, the situation changed as a result of the 2nd World War. While the Jefferson War Nickels continued to be produced, it was without the metal – Nickel, as a part of its physical composition.

The reason was that the military needed a lot of this metal for wartime purposes. Nickel was used for making ammunition, protective wear, and a few other things.

So, the administrators had to put a stop to the use of this metal in producing this coin. The rarity that became of this situation is the major reason the 1941 Jefferson Nickel is so special to collectors and many other people.

How to Determine the worth of a 1941 Nickel

Several things determine the actual value of a 1941 Jefferson Nickel. These things include the following:

1. Look at the physical condition

The use of Nickel as part of the physical composition of this coin did quite a lot to make it durable. But that being said, 1941 seems like ages and it is only expected that even these coins made with Nickels will have experienced some wear and tear.

The least which also means the value is a lot less is known as the “good grade”. This is a 1941 Jefferson Nickel that has given in to wear and tear as it has been in circulation over the years. However, the most important features such as the lettering and date are still visible.

The “fine grade” is what comes right after the “good grade” with a slightly higher value. Even though the wear and tears are evident, it is a lot better than the “good grade” as several strong contours are visible.

The grade known as “extremely fine” suggests that the 1941 Jefferson’s Nickel is not in a perfect state but ticks a lot of boxes. This is considering how the several details are still intact. For instance, the hair strands in their fine state are visible. The same can also be said of the contours on the portrait’s coat.

The best grade in terms of physical condition is known as the mint state. They are without any visible and non-visible trace of wear and tears. This makes them have an appearance that is pleasing. 1941 Jefferson Nickels that sell for off-the-chart prices are always in this category at the very least.

By and large, there are 3 kinds of 1941 Jefferson Nickel and you can tell especially by the inscription on the coin’s back. This is the letter that is written beside the Monticello Dome. This is the:

Considering that rarity is one of the major things that make collectible items appreciate, you should know that the San Francisco produced 1941 Jefferson Nickel is scarcer than the other 2. This is because there were fewer of these coins produced – well over 40 million.

On average, its value is between 15 cents to 12 dollars depending on the physical condition. However, the off-the-chart record for the highest price for this is 8,913 dollars. You can also be sure that it was mint-quality.

Next in line in terms of scarcity is the Denver-produced 1941 Jefferson Nickel. Well over 50 million of these were produced at that time. Depending on the physical condition, the average value is between 10 cents and 10 dollars. The off-the-chart record for the highest price for this is 11,400 dollars.

The 1941 Jefferson Nickel produced in Philadelphia is the most common with well over 200 million produced. Considering the law of demand and supply, this is why it tends to be the least valued. The average value depending on the physical condition is between 7 cents and 3 dollars. The off-the-chart record for the highest price for this is 5,175 dollars.

Certain production errors such as double die, off-center mistakes, and die cracks can drive the value of the 1941 Jefferson Nickel up.

The factors that determine the approximate value of a 1941 Jefferson Nickel and the history behind people’s sentimental attachment to this coin have been discussed here. You are advised to make informed decisions if you have to buy or sell this collectible going forward.