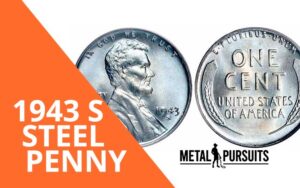 Collecting pennies might seem difficult for some people, especially if you are not a coin dealer. Pennies in high grade, high mintage quality, special features, and rarity are worth holding.

One of the rarest pennies that are worth holding nowadays by coin collectors is the 1943 S penny. The coin was unpopular at the time of its release, largely due to its steel composition.

Do you have any 1943 S pennies with you and do you want to know their current values? Check out this article for more information concerning the steel 1943 S penny history, varieties, and grades available.

During World War II, the United States of America needed more copper for the production of military artillery, coupled with the stoppage of supplies from Japan. Therefore, there was a modification in the production of pennies, which were dominantly produced with 95% copper. Commissions were given to about seven companies to do research and come up with new compositions and substitute materials. Various materials such as glass, plastic, and many more were tried before the United States mint finally settled on steel.

As it is with other Lincoln pennies, the 1943 steel cent bears the S mintmark below the year of production to indicate that it was produced in San Francisco. Contrary to its silvery appearance, the 1943 steel penny does not contain silver. The silvery appearance is due to the steel material and zinc coating. While in circulation, the zinc coating could oxidize and change color, thereby exposing the steel base to rust and the coins are usually rejected by vending machines.

The design of the 1943 steel wheat penny cent is a replica of the 1909 Lincoln cent by Vector David Brenner. The side view of Abraham Lincoln is on the obverse side, while the Wheat Heads memorial is on the reverse side, which makes it one of the Lincoln wheat pennies. The 1943 S steel penny is about 2.8 grams in weight, 19.05 mm in diameter, and has a thickness of 1.55mm. 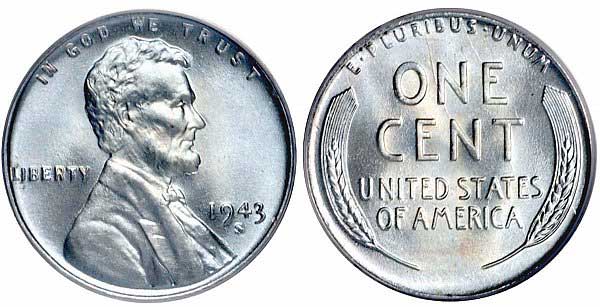 A few numbers of the 1943 S penny are available and it could be worth more than three times the face value nowadays. Nevertheless, coin prices depend on their current condition and grading. The following are the levels of grading coins.

Though the 1943 S penny is prone to wear and rust because of its material, there are still some of the coins that are in mint condition with a slight blemish on the surface. You can exchange any of the 1943 S coins in this condition for $7.

Any 1943 S coin in this condition has no mark of physical wear on the surface of the coin except for a slight blemish on the color. If you have any at this grade level, you can exchange them for $15.

Coins at this grade level are of interest to collectors because any trace of wear or blemish on the surface is almost unnoticeable. Moreover, the zinc plating is still in good condition. You can exchange any 1943 S penny in this condition from $25 to $28.

This is one of the highest grading levels of a coin. At this level, the coin maintains its mint condition and you can exchange it for $150 and above.

What increases the steel penny price?

The 1943 cent seems inexpensive because of its availability. Nevertheless, each of those pennies is now worth more than the face value on the coin price charts and the price could increase based on some factors. It could be sold at a record price at auction. Here is a list of some of the factors that could increase the price of a 1943 steel penny.

The 1943 steel penny was unpopular when it was released into circulation. Due to collectors’ interest nowadays, there is an increase in the demand for the coin, which has also increased its price.

As stated previously in this article, the grade level of a coin will determine its current price. Coins are graded based on their current physical condition and other factors.

Though the 1943 S steel penny might not attract the same value as its copper penny counterparts, any of the coins in good mint condition are still worth more than the face value.