These are very rare, and only 27 examples are confirmed as genuine. Though none have appeared in grades below VP, a number of pieces are corroded. The Finest known is a choice uncirculated specimen traced in John R. Sinnocok who was the US mint’s chief Engraver the time.

Values: these rare cents are offered too infrequently to establish any firm retail value, yet they seem to have less appeal to collectors than the more famous 1943 bronze cents and typically trade in the mid four figures.

Other facts: Less well known than the bronze cents of 1943 the 1944 steel cents from the Philadelphia Mint are also not as scarce. The first piece discovered turned up in circulation around 1945 and was the lucky find of Richard Fenton. It was not publicized, however, until another ten years had passed.

Apparently, collectors were still not ware of this issueas another discovery was reported in 1959 by WH smith of Fayatteville, Ohio.

Two explanations for this error coin exist, and it’s likely that both played a role. Leftover planchets from the previous year’s coinage may have become wedged inside the tote bins used to trans port unstruck planchets and finished coins if these planchets worked their way loose during 1944, a steel cent of that date would result. 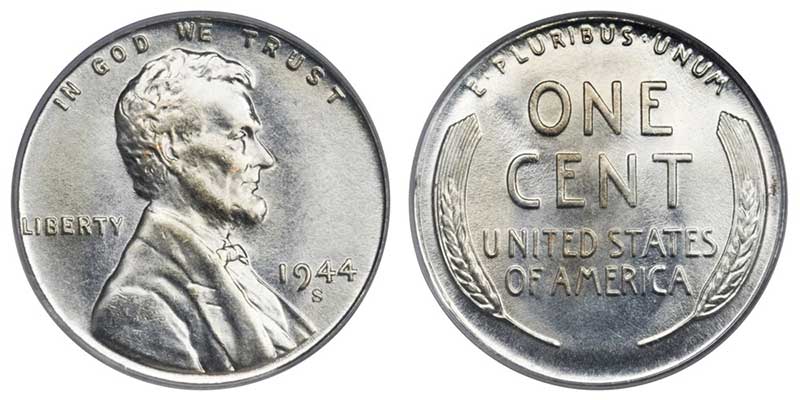 In fact, The Philadelphia Mint’s supply of remaining steel planchets was put to work during 1944 rather than being discarded. In an economy move, the 25,000,000 two francs coins struck the for use in liberated Belgium were specifically designed to utilize these planchets.

Their size and composition is unique for that denomination in Belgiums’ coinage history. It’s quite possible that some of the Belgian planchets made their way into a press set with US cent dies.

At least one 1944 steel cent seems to have been retrieved before entering circulation.

Shortly after the following coined it was presented by chief engrave John R Sinnock to a female acquaintance, who later sold both pieces to coin dealer William Grichin.

They were sold by him to Philadelphia dealer harry J. Forman. These coins then passed to prominent professional numismatist John J. Ford, who cosigned them to a Bowers & Ruddy Galleries auction held in conjunction with the 1981 convention of the American Numismatic Association.