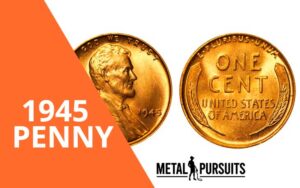 What comes to your mind when you suddenly discover a 1945 wheat penny in your pocket? Just like any other US penny, right? You are wrong if this is your thought.

Though it is no longer in circulation, the coin is, however, loved by both collectors and investors today.

Do you know the value of the 1945 wheat penny today?

Check out this article for more information on the 1945 Lincoln wheat penny? 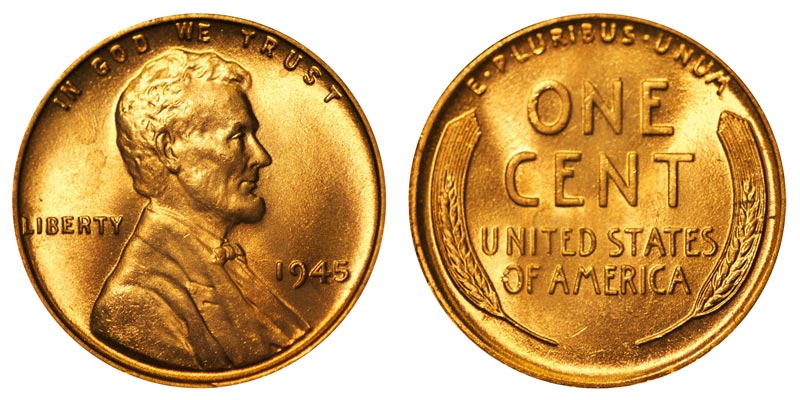 The wheat penny generally was designed by Victor D Brenner and it is officially called the Lincoln cent because it featured the 16th president of the United States Abraham Lincoln. Virtually all Lincoln pennies have the same bronze look due to their composition but the 1945 Lincoln is a bit different because copper is responsible for its color.

The obverse design of the penny coin featured Abraham Lincoln’s bust facing right. Above Abraham Lincoln’s bust is the inscription ”IN GOD WE TRUST”, ”LIBERTY” on the left side, and the year of production in the lower part of the right front side. Sometimes, you can see a mintmark below the year of production, except for the ones that were mint in Philadelphia. In the reverse design, the words ”UNITED STATES OF AMERICA” and ”ONE CENT” are surrounded by two wheat ears, and ”E PLURIBUS UNUM” is centered at the top of the main design.

Varieties of the 1945 Wheat Penny

The 1945 wheat penny has three different variations which represent the different locations where it was minted.

With a total of about 1,040,515,000, the Philadelphia mint was the second largest in mint production. It is the only penny without a mint mark below its production year. It is available in abundance and collectors do prefer the Philadelphia penny in mint condition.

Facts about the 1945 P Wheat Penny: These 1945 P cents have discoloration and other forms of streaking. But since these cents are quite common, with a bit of shopping you can probably find some uncirculated cents that have maintained their color. Their population is low because people are not prompted to submit inexpensive coins.

The 1945 Denver wheat penny is the most significant and about 266,268,000 were minted. It has the D mint mark under the year of production.  Collectors value the D penny that is still in good condition or lightly worn.

Facts about the 1945 D Cents: Most cents of this date are of fair quality. Spotting and streaking in this variety are common. However, there might be a number of them in good condition.

1945 wheat cent minted in San Francisco were the fewest in production. About 181,770,000 of it was produced. It has the S mintmark under the production year. Collectors prefer any of it that is still in good mint condition.

Rarity:  The 1945 S cents are quite common in all grades very good and higher. Both original and reassembled rolls of uncirculated coins may be found, though the former is becoming scarce for this and all dates of the Lincoln series.

Facts about the 1945 “S” Wheat Penny: There is a higher percentage of well-struck coins for this date, however, streaks and other discoloration amongst this mix is not uncommon though.

How Many Wheat Pennies Were Minted in 1945?

The current value of the 1945 wheat penny coin depends on its grading. Collectors and dealers thoroughly inspect different aspects of the coin for any sign of imperfection or scratches on the coin surface, color, etc. At times, they might make use of magnifying glasses for close inspection of minor details. Highlighted below is how the 1945 wheat cent is being graded.

This means coins that are still in mint state since the year of production. Therefore, it is unlikely that such a coin will have any sign of imperfection on the surface of the coin. At times, there will be a sign luster on it, which is not necessarily important to qualify it as uncirculated. It can only increase its value. Any sign of smooth texture of the penny or blending of Lincoln’s chin with the coin is an indication that such a coin is not uncirculated.

Though still in good condition, there are, however, signs of slight wear on it. Some of the lines might not be sharp as the ones in mint condition. Also, you can use Lincoln’s chin to judge if the penny is still in extra fine condition.  There could be some form of blending of the two surfaces under the beard and you can notice the original texture of the coin under the protected area of the eyes.

These are coins that are in the lowest condition and worn to the point where they are graded below extra fine. Many details and lines on it are not sharp again. The Lincoln’s chin could also be used as a parameter to determine if a coin is in this grade. It is usually exemplified by the smoothing of Lincoln’s jaw and chin.  Also, coins in this grade usually have scratches on the surface and the edges are usually darker.

The 1945 wheat coins are no longer in circulation but they are worth more than the face value if you have any of them. The penny value, however, depends on the mint variety and condition of the coin. A coin in circulated condition could be valued at 2 cents while you can get $3 for a coin in mint condition.

Not only was the 1945 wheat penny made during the Second World War, but its casing shell was also made from recovered ammunition during the war. This unique history makes the coin valuable today.