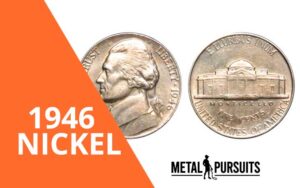 It is not uncommon to think that any of the 1946 nickels is not worth holding on to as part of your collection. While this may sound justified, what’s more, interesting is when you eventually find out that some of these rare pieces are worth over hundreds of dollars. Still, sound justified?

Ever since the 1946 nickel – also called the Jefferson nickel – was minted and sent into circulation (for more than 80 years now), this piece has not ceased from being one of the most primitive coinages in the history of America.

Variations of 1946 Nickel and Their Worth 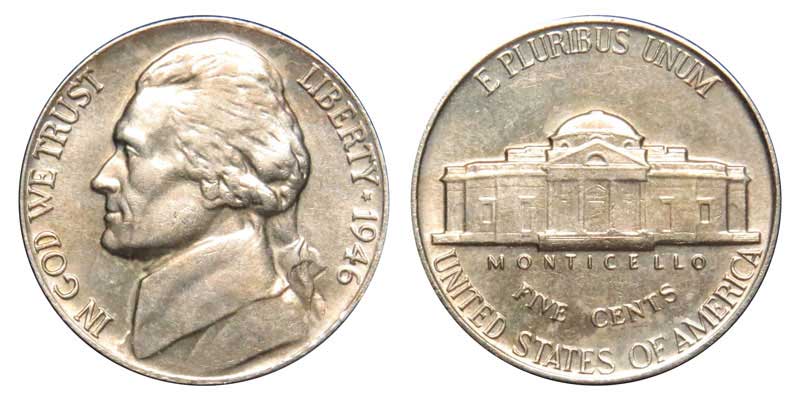 There are three (3) major types of the 1946 Jefferson nickel, and these specimens have varied market values based on the presence or absence of mintmark.

Of all 3 varieties of the 1946 Jefferson nickel, the S mintmark is the rarest. This coin has on the tail side, an S mark which indicates that it belongs to the San Francisco mintage.

A little over 13 million of the S mint mark nickel is minted, causing it to be a rare coin.

For 1946-S Jefferson nickels that are pumped into circulation, you would find them to be worth up to 50 cents while uncirculated 1946-S nickels could fetch you up to $1.25 or more apiece.

Otherwise called the 1946-D Jefferson nickel, this coin belongs to the Denver mintage where it got struck to bear the “D” mintmark on the tail side. This 1946 nickel is the next rarest after the 1946-S Jefferson nickel, with a little over 45 million minted.

Although the number of minted pieces is lower than that of the 1946 Philadelphia nickel (while we will look into shortly), it is still sufficient to fulfill the rising demands of collectors.

An average 1946-D nickel sent into circulation is worth up to 25 cents for each piece while specimens that are not circulated are often traded for $1.25.

This variety of the 1946 Jefferson nickel is the most common essentially because it has a higher number of minted specimens (over 161 million). The basic thing with the value of legal tenders (as well as other priced commodities) is that the more accessible they are, the lower the price that is placed on them.

In the case of these 1946 coins, which was minted at the Philadelphia mintage (with no mintmark), a larger proportion, more than the 1946-D and S nickel is sent into circulation for collectors, making it worth up to 10 cents (which is more than its face value). Uncirculated pieces of the 1946 Philly nickel are traded for $10 or even more.

NB: The 1946 Philadelphia nickel is also valued based on how visible the steps that are right at the base of Monticello are.

Other Valuable 1946 Nickel worth Having

Asides from these 3 major varieties that are known to be in circulation – which one may not find to be worth a substantial amount of money, there are other 1946 Jefferson error nickels that could be worth a lot of money, and yes they are also in circulation today. Let us take a sneak peek at a few of them.

This is one error Jefferson nickel that you should watch out for if you’re looking for a valuable 1946 nickel. These coins are found among the common varieties of 1946 nickel, just that they could be worth some huge amount.

The most priced center-off 1946 Jefferson nickel are those with 10 to 20 percent error as each piece of this nickel coin could be worth up to $50. In rare cases where there is a 50 percent center-off error, collectors can trade it for $100 a piece.

As of this writing, you may not find any known double die 1946 Jefferson nickel worth thousands of dollars, but it does not take away the fact that these error nickels can bag you at least 20 to 50 dollars apiece.

Effective Ways to Get Any of the 1946 Jefferson Nickel

Now that you are aware of how valuable these nickels could be, the next question that may pop up in your head may be “How do I get them?” There are over a dozen ways to acquire a 1946 nickel, but we have streamlined our list to just two (2) effective ways that would work for you.

Walk up to a coin dealer next to you

The easiest way to get any old Jefferson nickel is to walk into a coin dealer shop to purchase one. But if you are not willing to pay more than the face value of any 1946 nickel, you may choose to subscribe to other options.

Another effective way to get a 1946 nickel is to put a common nickel into the vending machine, then immediately hit the return button to get a different nickel in exchange. If you don’t get a 1946 nickel, keep trying the same process until you do.