The 1957 wheat penny is rare to come by and collectors have placed a lot of interest in it.

Do you know the worth of the penny today, if peradventure you found any inside your penny roll or pocket? Well, some of them are worth hundreds of dollars, especially if they are still in mint condition. This, however, depends on some conditions.

Read on for more information on the 1957 penny.

Things that determine the value of the 1957 penny 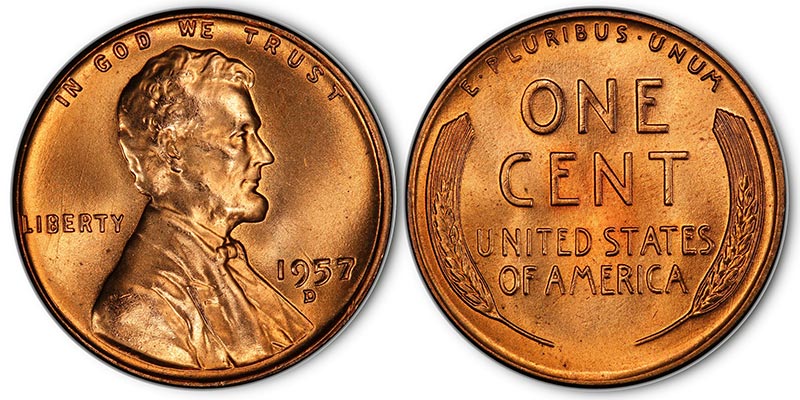 Normally, the 1957 Lincoln wheat penny will be worth more than its face value nowadays, but this depends on some factors. Here is a list of some of the things you should first know about the coin.

Condition of the coin: The sign of wear, scratch, or damages on the coin determines the worth of the coin. The lesser worn a coin is, the more its value.

Presence of errors on the coin: When you have the 1957 coin with a variety of marks such as doubled die strike, mintmark, punched, and other oddities. Some collectors offer more for coins with special errors.

The Philadelphia mint produced the lowest 1957 penny with a total of 282,540,000. The coins are also without mintmark under production year. On a rarity scale, the Philadelphia penny is rated abundant and collectors would prefer if the coin is in mint condition.

The Denver mint penny is regarded as abundant in rarity scale due to its high mintage, totalling about 1,051,342,000. It comes with the mintmark D below its production year and those in the average circulated state are attractive to new collectors.

Grading a coin means physically judging the condition of the coin for signs of wear and damages.

At times, you can tilt the coin under a light to bring out more details about the condition of the coin.

The details of such a coin will determine its value.

Highlighted below are some of the grading levels of a coin.

Any 1957 coin without any sign of wear to the surface design, fields, and legends is regarded as uncirculated. In addition, the luster of coin and mint frost that was imparted when it was minted remains in the same condition. One of the critical areas is Lincoln’s hair above his forehead. There should not be any sign of wear at the top of the curl.  Also, inspect Lincoln’s coat lapel on the coin for smoothing on the texture.

The 1957 Lincoln cent in extremely fine grade shows only light signs of wear. You will notice a sign of wear on some parts of the design. For instance, a small degree of flatness on the curls of Lincoln’s hair but all major lines separating the curls should be intact. Also, check for signs of smoothing on the lapel of Lincoln’s coat. Though young collectors still favor a light shade of brown color on the coin, any sign of discoloration or marks, however, reduces appeal for the coin.

The value of the 1957 penny depends on mint location, grading, and collectors’ interest. They are no longer spent as money but they are highly valuable. A typical uncirculated 1957 penny is worth between 15 cents to $10 and some could be worth more, especially if it goes for auction. The less worn your coin is, the more the value.

All wheat pennies, including the ones minted in 1957 are now obsolete. Sooner, the coins will be scarce and the worth will increase, especially to coin collectors.