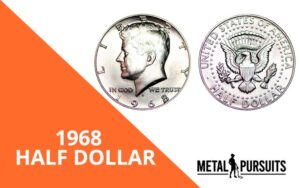 The assassination of President John F. Kennedy inspired the creation of the 1968 half dollar.

The coin, also known as the Kennedy half dollar, is rare in circulation due to its hoarding by collectors who want to sell for a higher price.

So what is the story of the 1968 Half Dollar? How much is it worth? How can it be found and is it still in circulation?

Let’s find out in this article.

Overview of the 1968 Half Dollar 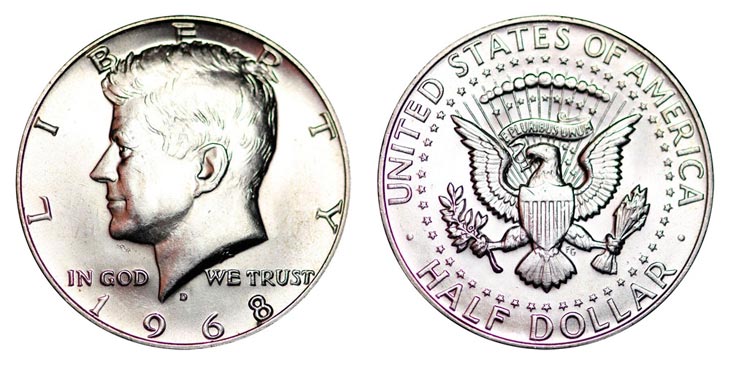 The production of the 1968 half dollar started in 1964, with 90% of the coin in silver. However, the subsequent versions of 1965 – 1970 were 40% silver. The 1970 version of this coin can be found in silver proof sets only and was never released into circulation by the US government. From 1971 upward versions of this coin are good-looking coins but not minted in silver.

These coins were minted with the value of silver and this increased the rate of hoarding, which reduced the circulation of this coin despite not minted in silver from 1971. Gilroy Roberts designed the coin with the face portrait of Kennedy and the upper rim is the legend inscription “LIBERTY” crafted with the year of mintage under the head. The motto “IN GOD WE TRUST” is the inscription on the neck of the portrait.

Later, the reverse design was done by Frank Gasparro, which has an eagle clutching a set of arrows with its while an olive branch on the other leg. A ring of stars surrounds the eagle and above its head, an inscription “E PLURIBUS UNUM”, with the legend ” UNITED STATES OF AMERICA” artistically written along the upper rim and the denomination “Half a DOLLAR” on the lower rim.

History of 1968 Half Dollar

1968 was the first year the half dollar was produced on more than one mint. It was also the year of the fifth mintage of the coin. Hence the name: “1968 Half Dollar”.

Between the years 1965 and 1971, the coin was minted in the silver-clad composition of 40% silver and 60% copper, bringing a diameter of 30.6mm and a mass of 11.5gram. However, several varieties have been produced, some are known to bring high premiums. One example of such variety is the Inverted “S”, a mint mark first reported by Joe W. Crowder, a rare variety found on 1968-S proof half dollars. The fact remains that this Inverted “S” variety can be said to have a San Francisco mint mark inscribed upside down.

In 2017, the newest variety was discovered with a mint mark variety labeled “SERIF S/KNOBS” by Numismatic Guaranty Corp (NGC). Also, the mintage of San Francisco, which is “S” is said not to be the typical design for this coin or yet any identified coin. Neither the history of this variety nor the number of examples that exist is known. However, there are lots of varieties of this coin that are rare and they are not significantly considered.

Due to the large mintage and excessive hoarding that was common during the early days of production of this coin, which is still common today, it has made the worth relatively very low but not for the highest quality coins. Nevertheless, one thing that is known among coin collectors is that they put more worth to coins than on their melt value or face value.

And just like any coin minted with precious metal, the minimum value of a 1968 half dollar is its melt value, and based on the price of silver, the melt value is around $2.40, as of the time of writing this piece. This means in circulated conditions, the coin is worth its weight in silver, which directly means the melt value of silver is around the said amount.

However, most of these half dollar 1968 coins are sold in uncirculated conditions, meaning collectors get these coins upon release without most of them not circulated. This brings us to Good-4 to About Uncirculated-50 issued by Denver, valued at $3.65, which is the average value for 1968 half dollar coins.

The 1968 half dollar issue is still in circulation and it’s worth collecting item if you are into coin collection.