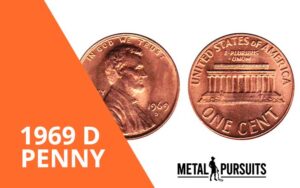 The 1969 D penny is worth more than the face value nowadays.

It is worth more than what you can imagine if you have any of it in mint or double die condition.

Read on for more information about this old penny that is still of interest to collectors in modern times. 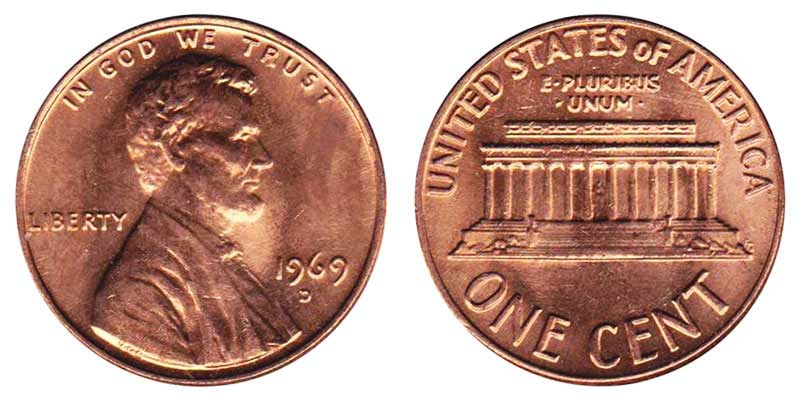 The 1969 D penny was made in Denver, the world’s largest coin mint and it was designed by David Brenner and Frank Gasparro. It has the D mintmark under its year of production. It weighs about 3.11 grams and it was made of 95% copper and the rest contains zinc and tin. Also, the 1969 D cent has a plain edge of about 19 millimeters. A total of about 4,002,832,200 1969 D pennies were minted.

There is a controversy about this and some people believed the initials were lost in the process of polishing the coin, while others believed they were lost due to abrasion or grease blockage.

The 1969 D Lincoln memorial penny is of interest to collectors but the value placed on it will depend on its grading.

Before the penny is valued, collectors will inspect different segments of the coin for any sign of wear and mark on the surface and the color.

For close inspection, collectors or dealers might make use of a magnifying glass.

Highlighted below are some of the grading systems for the 1969 D penny.

This is the highest grading level of the 1969 D penny. At this grade level, the coin has no trace of wear and it is without blemish. In addition, the coin still maintains its red color. A 1969 D penny coin in this condition was sold for a staggering price of $7,475 at a coin auction.

Collectors have an interest in coins at this grade. The coin is still in near-mint condition as the trace of wear or blemish on it is almost unnoticeable. Also, the color is still near red.

The 1969 D penny in this condition has no trace of wear but there are signs of blemish on the surface of the coin. In addition, the color has turned red-brown. The coin at this grade level is still of interest to collectors.

1969 D penny at this level of grading has no trace of wear. However, there are signs of blemish and discoloration on the surface of the coin.

About Uncirculated or AU50

At this level, the value of the coin has reduced but is still worth holding if you have any. There are signs of slight wear on Lincoln’s jaw and cheek. Also, the coin has an obvious trace of discoloration.

Though the coin is still in good condition. However, at this level, the details on the coin are still sharp, with slight signs worn on the surface of the coin.

This is one of the lowest grade levels. The coin at this level does not have sharp details again. There are noticeable signs of wear and damage on the surface of the coin.

This is the lowest grade level of the 1969 D penny. There are clear signs of wear and damages on the surface of the coin, especially in the year of production.

The 1969 D penny contains about 95% copper, which makes it valuable to collectors. However, the current value of the coin depends on its condition.