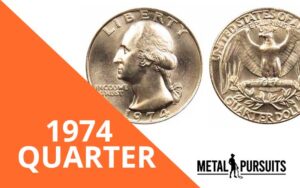 The 200th birthday of George Washington, the first US president inspired the creation of the 1974 quarter, which makes the history of this coin an interesting one.

Moreover, the coin is still minted and it’s mostly used in commerce.

So what is the history of the 1974 Washington quarter, is it still in circulation and is it worth collecting? 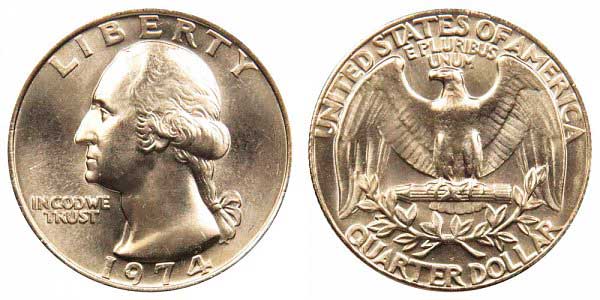 1932- the year that marked the beginning of the production of a coin designed by a great sculptor, by the name, John Flanagan.

The design by Flanagan had the detailed face of President Washington facing left, with the inscription “LIBERTY” centered above. While below the bust of Washington is the date featured with the motto “IN GOD WE TRUST” inscribed by the left. By the right of the ribbon in Washington’s hair, you will see a mint mark, which tells you the coin was either minted in San Francisco or Denver.

The reverse design of this coin has the spread wings of an eagle clutching a set of arrows and wreaths in its talons. Above the eagle’s head are these inscriptions “UNITED STATES OF AMERICA” and “E PLURIBUS UNUM” and below the eagle is the denomination “QUARTER DOLLAR”.

The coin is still minted with little changes to the 1932 version but the reverse design was replaced in 1999 that led to the production of designs to commemorate each state’s history by the mint. As we speak, the 1974 quarter is minted with designs of national parks across the United States.

Any 1974 quarter coin without the mint mark on it means it was minted at Philadelphia’s mint. A report has it that throughout 1974, about 801,456,000 of this coin were minted. I want you to understand that this figure doesn’t mean the actual figure in circulation. These numbers are from the United States mint and don’t reflect the number of those destroyed, melted, or those that were never released into circulation.

Also, the Denver mint minted about 353,160,000 of this coin with the mint mark “D”, though the recent mintage is higher. However, the 1974 quarter is still very much in circulation with examples of it commonly seen or found. The coin is made with a copper core layered in nickel and weighs around 5.67grams, with a diameter of 24.3mm around the edges.

It’s a fact that the coins minted in or after 1964 are considered to be a modern era of the quarter coins.

Doesn’t it mean that the 1974 quarter can be referred to as modern coun? Well, one can’t be wrong to designate it as a modern era coin, since it was minted after 1964, which means it can be included in any modern 1974 collection.

Besides, the modern coins minted between 1964 and 1998, the United States mint has started the production of the 1974 quarter with the original design obverse of Flanagan, however, the reverse design is in commemoration with the 50 US states. This single act by the US mint has made the collection of 1974 quarters more interesting.

Now, you can easily purchase all years and mint marks of this coin from an online store or a coin dealer – so they are easy to collect. One thing you should know is that modern collections focus on either the original Washington Quarter of 1964 to 1997 and the state quarter program of 1999 to 2008. All this has made the coin to be easily found or bought for a low price.

After 1964, the quarter minted was done in larger numbers which is why the 1974 quarter is still in circulation with a very low value. This means there is not much hoarding of this coin which has made the worth of it to be relatively low.