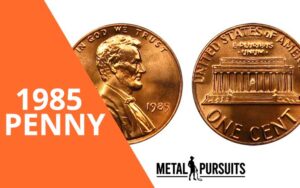 A large number of the Lincoln memorial pennies were minted in 1985, which makes it easier to come by it nowadays.

Nevertheless, are you curious whether the coin is worth holding, or do you want to know the current value of the coin?

This article will provide you with the necessary information about the 1985 penny.

The Lincoln memorial penny is one of the longest mint coins in history. It was first minted in 1909 and was updated in 1958.

The reverse side of the updated coin was designed by Frank Gasparro, where the Lincoln Memorial is at the center, the “United States of America” and “E Pluribus Unum” are above it.

Also, Victor D. Brenner designed the obverse side of the updated coin, where Lincoln’s burst was facing right, “Liberty” to his left, mint date to the right, and “In God We Trust” is centered above Lincoln’s bust. 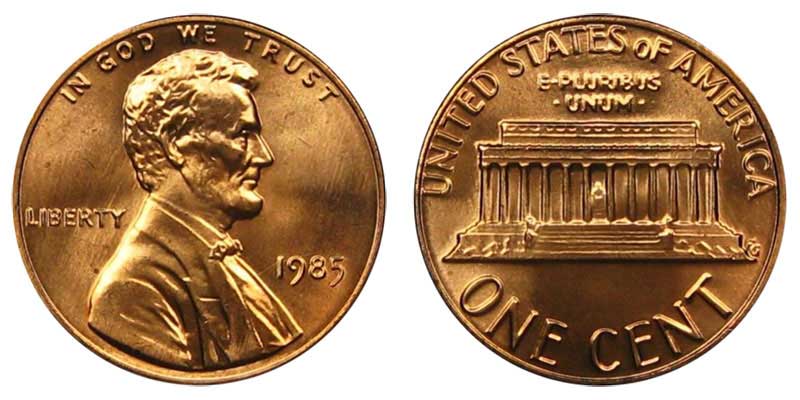 The 1985 penny was minted in three locations in the US, with the largest mint production in Philadelphia with a total of 5,648,489,887. Denver has a total production of 5,287,339,926, and San Francisco (proof coins) having the smallest production with a total of 3,362,821. More than 10 billion were minted due to a change in composition from copper-based pennies to zinc-based pennies, which allows for a low cost of production.

Because of this change in production, a lot of the 1985 pennies have distorted or flat details. Each 1985 penny has a diameter of 19.05 mm and a weight of about 2.5 grams. A typical 1985 cent also lacks raised bumps along the edges.

How many 1985 pennies were minted

Just like other pennies from the mid-’80s, the 1985 Lincoln memorial cent also has known mint errors, which might to some extent determine the current value of the coin. However, if you have any 1985 penny and you feel it has the highlighted errors, it is advisable to take such a coin to a coin dealer, to ascertain if it was a mint error or the coin has been damaged while in circulation. These errors are:

This is one of the valuable errors of 1985 one cent This occurs when the copper plating of the coin is missing, thereby exposing the silver-colored zinc layer underneath.

This is an error in the 1985 penny that error collectors watch out for. This broadstruck error occurs when the coin has a diameter that is flatter than normal or longer than 19.05 mm, which makes the coin look like it was squeezed or crushed.

A double die 1985 penny will have a double lettering inscription and date on it. At times, this could be obvious or faint on the coin.

This type of error on the 1985 penny is similar to the double die error when the mintmark is punched twice. A mint mark is a letter below the year of production that indicates the place where the coin is produced in the US. Though you can easily notice the repunched mintmark error on some coins you have to watch closely before you see it in other coins

More than 10 billion Lincoln pennies were produced in 1985, which makes it easier to come by any of them nowadays.

The current value of the 1985 penny is about the face value or slightly above, depending on the mint and appearance condition. However, you can exchange the 1985 penny for more than $10 if it exhibits any of the errors highlighted above.

Depending on the appearance condition, a 1985 penny with significant peeling error from the bottom zinc layer can go for $10 or more while a coin that exhibits significant bubbling from any side of the coin can go for $2 or more.

Also, it is easier to come by 1985 penny with broad strike error. It could be exchanged for $20 or more, depending on the mint condition. Nevertheless, a coin with extreme broad strike error could go for $100 or more, depending on the level of the error.  A coin with a double die error or repunched mintmark error could be exchanged for as low as $10.

There is an abundance of the 1985 penny, which makes its current value relatively low when you compare it to the value of other Lincoln memorial pennies. You can, however, exchange the coin for more than its face value if you have any of it with known peculiar error varieties and in good condition.