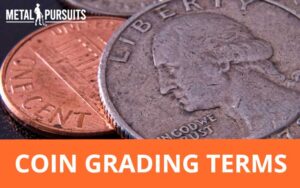 While you were out metal detecting, you discovered an old coin that looks valuable and now you want to find out what it is worth.

As you search through the coin price guides you are faced with the task of coming up with a grade for the coin you found while metal detecting.

The problem is that there are so many terms and aspects of coin grading that it is easy to get confused.

To help out, I have composed a glossary of coin grading terms.