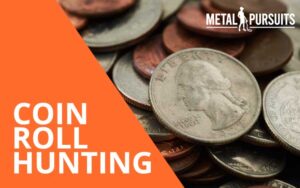 Get excited when you discover a silver quarter in pocket change? Coin roll hunting and coin spotting may be your thing.

A friend recently discovered a 1980 Lincoln Doubled Die Obverse in his pocket change. That 1 cent coin sold for just over $75!

A while back I was given a 1946-P Walking Liberty Half Dollar in change at my local drugstore.

We recently documented a coin find that netted the collector a $150 gold coin.

Does that happen everyday? No, but enough times to know that a lot of folks aren’t paying attention to the money in their pockets.

And that makes coin collectors like me very happy!

Do you check your pocket or purse change? If not you could be letting a fortune slip through your fingers and not even know it!

Coin Roll Hunting – What is it?

In its simplest form Coin Roll Hunting is buying change at face value to search for valuable coins. Those coins could contain silver or simply be scarce or error and die variety type coins.

My friends 1980 Lincoln Doubled Die Obverse coin above is one of those scarce and error type coins.

The Walking Liberty Half Dollar I got in change is an example of a silver coin.

What coins are people looking for when coin roll hunting? Basically they’re searching for:

We’ll discuss specific coins to be on the lookout for in just a few paragraphs.

Everyday people who take a few minutes of time find valuable coins like these while Coin Roll Hunting!

Where Can I Find Coins?

Everywhere there is change! You never know when that next shiny coin will pop up. Coin roll hunting is about being aware of the change in your hand.

If you become addicted to the chase of Coin Roll Hunting you’ll become aware of many different places to find coins.

Build a relationship with your local bank tellers. When you ask for full rolls you can ask for Customer Wrapped Rolls (CWR), Bank Wrapped Rolls (BWR) or teller tray coins.

You can also ask for, or order, full boxes or Bank Wrapped Rolls.

Most banks are more than willing to provide what you ask for if they have it inventory. If you happen to have an account with that bank you’ll be able, in most cases, to order full boxes of coins.

Branch banks that do a lot of business with local merchants tend to have boxes on hand.

I’ve gotten into the habit of asking store clerks if they’ve seen any interesting coins in their register when I’m paying for purchases. If they have I explain I’m a collector and am willing to buy the coins. Most of the time people are very cooperative and, if they’re not too busy, take a minute to check. I’ve found many silver and interesting coins by simply asking.

Now, let’s look at specific coins to watch for.

What Coins Do I Look For When Coin Roll Hunting?

Most 90% silver dollars, like Morgan and Peace dollars, have disappeared from circulation and won’t be found in bank rolls. I have been lucky in finding a few silver Peace Dollars when asking clerks as I’m paying for purchases at stores, particularly at rural stores.

Barber Half Dollars have all but disappeared from circulation at this point. However, Walking Liberty and Franklin halves continue to show up often enough to keep coin hunters hoping. Full rolls have been discovered!

Kennedy Half Dollars in 1964 were minted of 90% silver and millions were saved by fans of the slain President. From 1965-1970 the composition of the coin was changed to 40%. Collectors are always on the lookout for these coins and they show up often.

The last 90% silver quarters for circulation came out of the U.S. Mint in 1964. Finding a Standing Liberty Quarter is a long shot, but it has happened.

The most common silver quarter you’re likely to find is the Washington Quarter minted from 1932-1964. They’re are a couple of rare issues of these coins to be aware of. Read Rare Quarters of the Twentieth Century for more information about them.

Both Mercury and Roosevelt Dimes show up often in bank rolls and in change. The last 90% silver Roosevelt Dime was issued in 1964.

Because they are so small people often ignore them but there are both errors and varieties that can be valuable if found.

Silver War Nickels are very popular and tend to show up in both bank rolls and change often. Popular with collectors and WWII buffs alike, make sure to set these aside when you find them.

*Look for the large mint mark on the reverse above the Monticello to confirm it is a silver nickel.

The lowly Cent is probably the most collected of all U.S. minted coins, and the most ignored by the general public. But, there are Cents discovered often that are worth thousands of dollars. You just have to be aware of what coins to be on the lookout for.

If often find Indian Head cents in bank rolls and estate sales. Wheat cents are still common in change. Many people collect all Cents minted prior to 1983 because they are copper. Just be aware that it’s illegal to melt them!

There are literally hundreds of both error and die variety Cents that are worth hundreds of dollars if found. Again, you have to educate yourself and learn about the coins. The best thing is to keep a reference handy on your desk.

This is by no means an exhaustive or complete list of interesting or valuable coins you can find in your pocket change or in rolls of coins when Coin Roll Hunting. It is a starting point. A list of suggested coins to look for that may be slipping through your fingers.

In the final section we’ll look at required references and resources you can use to determine what you’ve found. If you don’t know what to look for, you’ll never find it!

After spending dozens of years basically doing what I’ve described above I found out I’m not the only one enjoying the hunt! The author of Strike It Rich with Pocket Change: Error Coins Bring Big Money has been doing exactly the same. In fact there is a huge community of coin collectors using these resources for fun, enjoyment and sometimes a little profit.

The U.S. Mint produces error coins each year. From doubled-die cents to rotated reverse quarters to missing letters on dollars, these coins can be worth far more than face value and Strike It Rich with Pocket Change: Error Coins Bring Big Money will help you spot these valuable coins

Author Ken Potter is regularly featured in Numismatic News, Coin World, World Coin News and others. His own website, Ken Potter’s Variety Vault, is a treasure trove of information for coin collectors.

Strike It Rich with Pocket Change: Error Coins Bring Big Money is now available on Kindle! If you haven’t found a good reason yet to have your own Kindle this could be it. I’ve been going to coin shows, coin shops, pawn shops and anyplace else I could find coins for years. For much of that time I’d carry a notebook or small reference manuals. After a while it became a pain to lug all of that around. Having all that same information in the small Kindle package makes life much easier. Get yourself a Kindle and keep all your coin references in one place!

Learn the secrets for finding valuable silver, error and variety coins. Will you get rich? Probably not, but it’s a great way to learn how to have your hobby pay for itself. Get your copy of Strike It Rich with Pocket Change: Error Coins Bring Big Money today!

I have done this on and off for years. It’s not so much about profitability, but the thrill of the hunt. I have found some pretty good items searching rolls I got from local banks.

Search rolls of coins for die varieties, war time nickels, silver Roosevelt dimes. Some of the finds I keep, many I sell or trade.

For me it’s the same feeling that got me hooked on coin collecting when I was a kid. It’s finding that one coin that is interesting to me. That is certainly different than what might interest you or the next person.

It’s the find. The chase. The hunt. That moment of “cool” or “wow.” Coin Roll Hunting is the passing of time doing something relaxing, pleasant, punctuated with moments of surprise and occasional delight!

If you’re looking for a great hobby for yourself or with your kids, Coin Roll Hunting may be just the ticket! Give it a try, there’s little to lose except a bit of time.