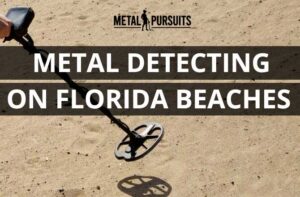 I lived in Florida for 3 years not long ago and spent a lot of time Metal Detecting on Florida Beaches.

This guide is based upon those actual experiences.

So Hopefully I will be able to give you some great tips for Treasure Hunting, coin shooting and jewelry finding on Florida Beaches!

Laws and Metal Detecting in Florida

There are so many public beaches in Florida that you can do a different one every weekend and never run out!

We have included a section on Laws for Metal Detecting on Florida Beaches at the end of this article.

Please read it and then seek advice from a lawyer if you are worried. I AM NOT A LAWYER AND DO NOT GIVE LEGAL ADVICE!

If I were to sum it up I would say:

When to Go Metal Detecting on Florida Beaches

THIS IS SERIOUS – Florida is HOT! In the summer time you can get heat stroke on the beaches!

August is like an open frying pan on the beach. Yes people are out there tanning and I don’t know how they do it.

I HIGHLY recommend that you go early in the morning or late in the afternoon.

Mid winter it can get cold on the beach. 50’s with a wind can chill you down fast,

In Spring it rains almost every morning for a half hour or so it seems.

What to Bring Metal Detecting on Florida Beaches

Your Detector (Duh, and yes I have forgotten it on a trip or two).

Light long sleeve shirt and hat with a brim to block the sun (you can tilt your head at the right angle and block the sun out of your eyes) and sun glasses (Some of the beaches are white and it is like going snow blind after a while form the sun reflecting off of the sand) and if you should look at a pretty girl…and there are plenty…you wont look like you are staring. Just don’t walk into anyone or anything while doing so.

A tool belt with pouches or pants with plenty of pockets (One for the good stuff you find, one for junk, one for an occasional nice shell, etc).

A bottle of nearly frozen water and a way of carrying it. I had mine in a belt around my waste.

A SAND SCOOP! I used the long handled model so I didn’t have to bend down so much. You can click on this link to read our article on sand scoops for metal detecting.

Where is the best place on the beach to Metal Detect on Florida Beaches?

99,5% of the other people I saw metal detecting on the beaches were detecting near the water line to within 10 feet of it.

The three best places to go metal detecting on Florida beaches are:

I was using a Garrett AT Pro (read our review) and would find stuff down to 10 inches in the sand so I was happy with it. Any detector that is designed for the salt and beach will work fine. A detector that is waterproof is a plus if you want to go wading.

You can click on this link to read our article on the best metal detectors for the beach.

DISCLAIMER: I AM NOT A LAWYER. IF YOU WANT LEGAL ADVISE SEEK A LAWYER. THIS IS JUST THE BEST INFORMATION I COULD PULL TOGETHER FROM STATE WEBSITES AND TREASURE HUNTING WEBSITES FOR METAL DETECTING FL. IT IS NOT MEANT TO BE LEGAL ADVICE!!!

There are no Florida laws or state statutes that prohibit you from diving with a metal detector. It is true however, that you must stay out of leased sites for example you can dive on Mel Fisher wrecks on the treasure coast if you so desire. However, be advised that you should not have a metal detector in the lease sites, and you must stay 300 feet away from the dive boats that are working the leases. This is similar to laws for encroaching on peoples gold leases on land.

Additionally, you must abide by Florida law when metal detecting. Should you find anything on the bottom and recover it. Effective 1 June 2005, the state of Florida did away with the Isolated Finds program. This program gave treasure hunters the opportunity to keep the find as long as they provided the state with the location.

It is now against the law when metal detecting in Fl to recover anything in state waters more than 50 years old. As a diver metal detecting in Fl you are responsible for knowing these laws and locations before you dive with your detector. In Florida state waters include all submerged bottom lands to include lakes, rivers and three miles out into the ocean on the East coast, nine miles out on the Gulf Coast, and twelve miles out from Key West.

Laws for Metal detecting in FL inside State Parks

When metal detecting in Fl inside State parks you are required to get written permission from the Park Ranger before you hunt in the park. However, the State does allow metal detectors in some state parks.

You can check www.floridastateparks.org and look up the rules for the park you are going to.

Laws for Metal detecting in FL inside National Parks

The Laws for metal detecting in Fl inside National Parks are STRICT AND SERIOUS! Do not bring your detector into a Florida National park, and that includes any beaches, or waters adjacent to the National Park. For example the Canaveral Seashore National Park is patrolled by park police by land, sea and air. They have strict orders to keep treasure hunters away.

This is true for many (or all? I am not sure) National Parks thruout the US. They don’t want people plundering (and yes people have tried to bring backhoes and bulldozers into national parks to dig up sites that they believed contained treasure) what belongs to all the people of the US and leaving behind a mess for the parks to clean up.

Laws for Metal detecting in FL on Private Beaches

There is good news on metal detecting in Fl on Private Beaches – There are no private beaches in the State of Florida (other than the National Parks), and you are allowed to hunt the beaches from the Dune to the low tide line as you desire, and that includes the beaches adjacent to the 1715 fleet of Spanish shipwrecks UNLESS YOU ARE WITHIN 3000 (or is it 5000?) Yards of a Lease.. The rule on the beach is finders keepers, so don’t let any beach side Condo owners or Hotel operators try to run you off, as they do not own the beach, the people of Florida own the beaches so you can go metal detecting on the beaches.

However I have been run off of several beaches by private beach front security guards in front of fancy houses and condos.

I would advise to leave if you are asked to.

If you play tough guy chances are they will call the police and there is enough obscurity and missinformation in the laws concerning metal detecting in Florida that you could be arrested and have your detector confiscated even if you did nothing wrong.