What is a Mint Mark on Coins? 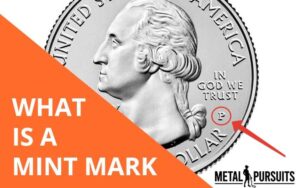 A coin’s Mint Mark is an inscription on a coin that tells you where it was made. The Mint Mark may be located on the obverse, or front, of the coin or the reverse. In most cases Mint Marks are a single letter but some coins from around use the full spelling of the location where the coin was minted.

Mint Marks came into use centuries ago so that problems with coins could be traced to their origin and corrected. In the past dishonest mint officials had been known to use less precious metals in the coins, keeping the extra for themselves and thereby cheating the people. Serious offenses like that often called for severe penalties. Those problems are far less likely to happen with today’s technology and the full specifications of coins being published so people know exactly how much a coin weighs and its physical dimensions.

In the U.S. the following are current or former mints and their particular Mark:

With only 2 exceptions coins minted before 1980 at the Philadelphia Mint carried no Mint Mark. The 2 exceptions being Nickels produced during WWII and the Susan B. Anthony Dollar first minted in 1979.

Knowing where a coin was minted helps coin collectors determine a coin’s value. Having the date and Mint Mark will lead you to how many of the coins were actually minted. And knowing how many were minted will, in most but not all cases, help lead to the value of the coin when added to its condition.