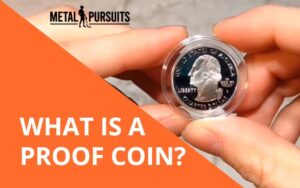 Proof Coins are some of the most exquisite coinage artwork produced. The beautifully smooth, mirrored, clear fields reflect the frosted features of the coin and when well done produce a cameo effect on the coin.

But the term “Proof Coins” does not describe the condition of a coin. It is how the coin is minted.

In the early days of minting the first test of coinage dies were usually used to check for problems and to make sure everything aligned correctly. These coins provided the proof that the dies were correct. After the coins were approved the regular run of minting started.

The term “proof” refers to a specialized minting process that begins by manually feeding burnished coin blanks into presses fitted with special dies. Each coin is struck multiple times so the softly frosted, yet detailed images seem to float above a mirror-like field.

So Proof Coins go through a different process to be produced than coins meant for circulation. But what’s the difference then between an uncirculated coin and Proof Coins?

An “Uncirculated Coin” is a coin that was minted for regular business circulation but hasn’t been circulated. It may have bag marks from being tossed around in bags with other coins but hasn’t been subject to the wear and tear of every day use. It is the “condition” of the coin.

Proof Coins are proofs because of the way the are produced.

Proof Coins utilize specially prepared and polished blank planchets. Planchets for Proof Coins are hand selected. They are then individually polished and cleaned before they are ready for the pressing.

Specially prepared and highly polished dies press the coin’s design into the prepared planchets in order to produce the Proof Coins we all enjoy today.

Proof Coins are normally struck more than once to ensure the metal flows into all the parts of the die. Multiple strikes are required for Proof Coins to produce the fine, art like details created by the coins designer. This level of detail doesn’t appear on coins created for circulation.

Each Proof die is closely inspected before use and goes through a special polishing process. They are cleaned or replaced often in order to ensure the design is capable of producing full strikes.

Once the new coin comes out of the die it is hand inspected to ensure it has received a full strike and all the details of the design are evident.

Newly minted Proof Coins created by the U.S. Mint are never touched by bare hands ensuring fingerprints and other contaminants are not left on them.

The coins are then placed in a plastic container and sonically sealed to keep contaminants out. Unlike vacuum sealing sonically sealing leaves the air inside the container allowing for the coin to tone and age naturally over many years.

The entire process of minting Proof Coins is much slower than producing business issue coinage. The technical checks are extensive to ensure full strikes and clear details of the coins design.

For those interested in collecting modern U.S. Proof Coin Sets this reference volume is packed with information starting with the 1936 release of U.S. Mint Proof Coins sets.

It’s important to remember that grading Proof Coins is different than grading business strike coins whether they are circulated or uncirculated.

The current grade scale used by the American Numismatic Association (ANA) ranges from PR60 to PR70.

Coins awarded the PR70 grade are virtually flawless. Coins with this grade are extremely rare even with all the care and time given to creating Proof Coins.

PR65 Proof Coins may receive that grade for imperfections visible under a magnifying glass. They will have maintained over the years the original luster imparted by the minting process.

A PR60 grade is given to those Proof Coins that have imperfections visible to the naked eye like scratches. The Proof Coins may also have lost some of the original luster and appear dull.

Proof Coins are extremely popular with collectors because of the effort and attention to detail that goes into their creation. As a result of that time and effort Proof Coins are more expensive to produce and command a premium at the time of their sale.

Many older Proof Coins are rare. In the early days of minting, even up to the last century, Proof Coins were only minted in very limited quantities in many cases.

A good example is the 1895 Morgan Proof Coin. No business circulation 1895-P Morgan Dollars were minted but about 880 1895-P Proof Coins were. Only about 80 are known to exist today making them extremely valuable and known as the King Of Morgan Dollars.

Many commemorative coins are also issued by the U.S. Mint. One of my favorites is the beautiful $50 Buffalo gold coin. It’s a reproduction of the original 1913 Buffalo Nickel in gold and is only created using the Proof Coins process.

Most of these are available directly from the U.S. Mint Website.

Most coin collectors become hooked on Proof Coins when they’ve seen their first Proof Nickel, Quarter or Dime. Beautifully struck Proof Coins are miniature pieces of art. With such clear details and reflective surfaces Proof Coins are wonderful examples of the art of coin minting.