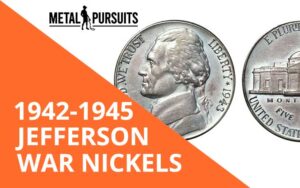 The Jefferson War Nickels were produced in response to a critical shortage of nickel metal. WWII military needs out-weighed the needs of the U.S. Mint and Congress directed the mint to find a substitute for nickel in the 5 cent pieces.

When the Jefferson Nickel series began production in 1938 the composition of the coins consisted of 25% nickel and 75% copper. The challenge for metallurgists was to come up with a composition that would still work in vending machines where not only the weight of a coin is checked the electrical properties are checked, too.

The discovery of a metal composition containing 56% copper, 35% silver and 9% manganese that met the usage requirements paved the way for Silver Nickels.

Congress authorized the use of the new composition with the Act of March 27, 1942. The first Wartime Nickels were released in October of 1942. With that the wartime nickels became the first five cent coin to use silver since Half Disme minting ceased in 1873. For the first time a Nickel would have no nickel in its composition. 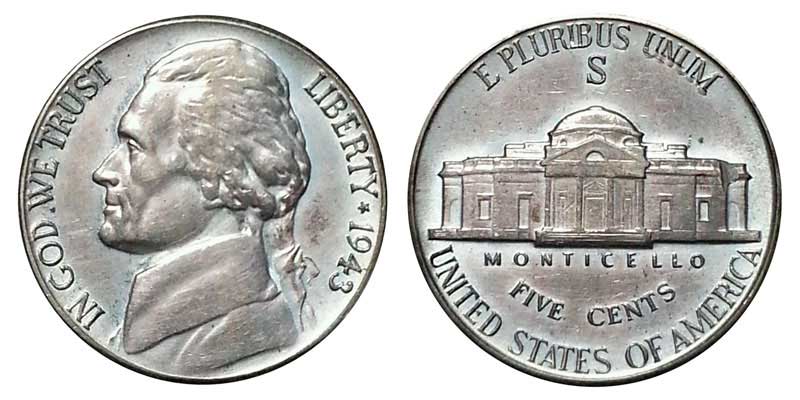 The original design of the Jefferson Nickel features Jefferson wearing a coat and wig facing left. Circling the rim is the motto “IN GOD WE TRUST” on the left and “LIBERTY” followed by the date on the right. Look closely at the space between “LIBERTY” and the date and you’ll find a small five pointed star.

The Jefferson Nickel reverse features the familiar front view of Jefferson’s estate, Monticello. The legend “MONTICELLO” is directly below, the denomination “FIVE CENTS” in an arc immediately below that. Circling the rim of the reverse is the motto “E PLURIBUS UNUM” at the top and the legend “UNITED STATES OF AMERICA” on the bottom.

The design of the new silver nickel was changed slightly. The hope was that following the war the special wartime nickels could be removed from circulation. Originally the Jefferson Nickel mint mark was on the reverse to the right of Monticello and no mint mark was used if the coin was minted in Philadelphia.

Silver Wartime Nickels were minted at Philadelphia and both active branch mints of the time, Denver and San Francisco. Complete mintage numbers of the Wartime Nickels is shown below.

The copper, silver and manganese alloy used by Wartime Nickels was difficult to work with. Lamination problems and irregular oxidation of the coins are common.

The hoped for withdrawal of the Wartime Nickels following the conclusion of WWII didn’t happen and the silver coins continued to circulate for many years.

Over the years varieties and errors have been discovered on Wartime Nickels. These variety coins have become very popular with coin collectors. The most common is probably the 1943-P 3 Over 2 overstrike. Following that is a known 1943-P Double Die Obverse, 1943-P Double Eye and a 1945-P Double Die Reverse variety.

Proof versions of the Wartime Nickels were produced in 1942 only, 27,600, and carry the “P” mint mark. Many of these Proof coins have been certified Cameo or Deep Cameo.

Whether certified business strike coins or proofs, collecting this short series of coins is relatively inexpensive. Up to PR67 Wartime Nickels can be found for very reasonable prices. With the exception of the 1943 Over 2 Overstrike Business Strike Wartime Nickels are very reasonably priced right up to MS67 condition.

It only takes 11 coins to create a set of Wartime Nickels and they can be had inexpensively. These silver nickels are popular with coin collectors and are fun to collect. If you hadn’t thought of them Wartime Nickels can be great coins to start your coin collecting hobby with!